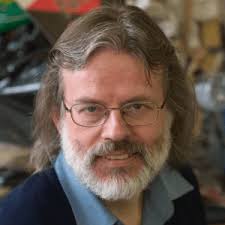 Schat materialized his theory by installing a set of twelve leaded glass roof windows in his canal house in Amsterdam. The original set can now be seen in the Royal Conservatory in The Hague, where Schat both studied and taught. But in the attractive spiral form in which the windows are hung there, they lost their function of being ‘a gateway to heaven’. Schat’s fascination for cloudscapes, celestial bodies and heaven itself was well-known; think of De Hemel (‘Heaven’), one of his tone-clock compositions.
In PentAhouse, this function was restored.

The film goes to show that all 12 triads are existent as motives or even themes in the diatonical world of the classical repertoire. Try to identify them before reading the credits!
I unified these twelve in the form of a quintet (for flute, clarinet, trumpet, violin and cello). For the transition from one theme to another, I used musical material from the original compositions. Therefore, I call this piece a compolation (= a compilation of compositions).

The joker of the system is the 10th hour, 3 + 3. Since it is impossible to map four non-overlapping diminished triads on a dial, Schat used three diminished seventh chords instead: three squares instead of four triangles. In order to do justice to this exception, I used here (harmonically, not melodically) what I believe is the diminished seventh chord most familiar to the average music lover.

The twelfth hour in this compolation is remarkable for being the first 12-tone series in a classical symphony (I left the introductory A flat to the violin!). Moreover, the theme itself consists of four consecutive augmented triads. To illustrate this, the small pentagons, indicating how each triangle becomes a triad, remain visible till the end of the exposition.

The coda consists of 12 short motives, each exemplifying a triad on one of the faces of the dodecahedron in front of PentAhouse. This mathematical body unites the Tone Clock with the other pillar under PentAhouse: its tribute to the golden section, typically exemplified by the pentagon. The dodecahedron has 12 pentagonal faces, and in this dodecahedron each face lodges one of the hours of the tone clock. The triangles on the dodecahedron are therefore identical to the triangles on the windows.
(The history of the golden section is expounded in Albert van der Schoot, Die Geschichte des goldenen Schnitts, Stuttgart, 2nd ed. 2016.)

With a final ninth chord containing several of the earlier themes, the piece dissolves into space. My humble hope is that Schat himself, from his elevated position in Heaven, will enjoy this ommaggio to his discovery.